I applied this concept a couple of weeks ago when attempting to teach better line work on blinds. It worked really well.

The following is a repost of an article I wrote a little over a year ago titled “Learning to move in the negative space.”  After spending some time observing my fellow dog owners in a recent training workshop, I thought it might be a good time to revisit this concept.

Every discipline includes a number of fundamental concepts that help guide both novice learning and expert practice in the field.  Mathematics teachers know that students must understand the properties of real numbers before algebraic thinking is possible, and history teachers know that understanding a concept like attribution is essential for those learning the work of an historian.  Those of us working in teacher education know that prospective teachers must acknowledge and understand the role of “prior knowledge” in their students’ learning, if they are ever to be successful as teachers themselves.

In art and design, one of these fundamental concepts…

Less than a week after returning from holiday it’s back to earth with a bump and a bang. While Elly attends pre- school I have being taking Zoe to Mountainstown to ‘dog-in’. This basically involves combing the boundaries of the estate and pushing the young pheasants back to where the gamekeeper wants them. It’s a two hour workout but my little gun-shy spaniel that won’t retrieve has finally found her niche.

With just under two weeks to the Chesapeake Bay Retriever Autumn working test in Essex training is ongoing for Winnie and Bertie. A week spent in kennels has left them with an exuberence of energy. I’ve spent the week doing regular short training sessions to allow them regain focus. Mossy had also been on the cards to compete but is unfortunately recovering from a fractured metatarsal.

The fracture was diagnosed by x-ray on Monday, followed by surgery to remove the bone fragment on Wednesday. There was no point in waiting to see if it would fuse as it was a ‘floating fragment’. I had my suspisicions he had been carrying the injury for quite a number of weeks. Intermittant lameness on hard ground, I had written off as having picked up a prod. There was no obvious injury or swelling to the paw or any tenderness on palpation. He was weight bearing but yielding ever so slightly .

Anyway after the week in kennels  all the dogs were fizzed up and raring to go. The corn had been cut behind our house. So Saturday morning I opened the gate and off they went. Galloping like young colts let out on fresh grass.

It was when we returned  from that walk  the injury to Mossy’s foot became apparent. The toe started to swell, it was extremely tender to the touch and he could now  no longer bear any weight while standing. Still convinced, however, it was a foreign body of some sort I booked him into the vets for Monday morning. The diagnosis came through that afternoon.

Following surgery Paul, my vet, confirmed it was a fracture that was at least six weeks old. The decision , therefore, to go ahead with surgery rather than defer was the correct one.

I am pleased to report that the surgery was a success and he is recovering well. He will miss his opportunity to compete at the Chesapeake Bay Retriever Autumn Working test but thankfully long term this injury will have no lasting consequences.

The week ended with Bertie winning his fourth green star towards his Irish Show champion title at the Irish Kennel club International show. He also won his second CACIB and BOB.The judge was Mrs N Davidoc from Serbia. Three more to go….

Something had been bothering me since attending Mr Onen’s training day in August. It stuck in my head for days afterward. One simple sentence that morning when he said, ‘all dogs were stupid’. I could almost feel the mental resistance among my fellow handlers. He was on the verge of losing our attention in that single moment…..

It didn’t make sense. His complete respect and handling of the dogs throughout the day was in direct contradiction to what he stated that morning. I saw how some simple techniques applied to my own dog on the day could improve him and that alone was just enough to spur me on.

Then the penny dropped. About a week or so after attending his training day I think I figured it out. Norman’s speech that morning was aimed at making us believe our dogs were of a lesser intellignce. What naturally follows when any of us attempt to communicate with a person or animal of lower intelligemce is that we speak less and communicate more through use of body language and other cue’s.

Of course, in our minds, we all know that dogs do not understand the English language. Yet, on any given day at a training class or working test we repeatedly see handlers have full conversations with their dogs  and get frustrated when their dog does not respond. In reality what  happens is that the dog gets so caught up in the endless nagging voice, rather like a dog barking in their face,  that they switch off. They shut down or simply give the two fingers and run off…

The irony is we’re also acutely aware of the fact that dogs are experts at reading non-verbal cues both from other dogs and us humans. They learn very quickly when you’re getting ready to go for a walk and, most well socialised dogs, understand very clearly the intentions of other dogs without ever having to utter a single syllable..

Everything about the techniques which Mr Onen applied that day involved and revolved around silencing the mouth and using other signals. I watched him that day as he took a young dog that was constantly pulling forward on his owner. He held the rope lead loosely over two fingers and by use of slight pressure and slowing his walking pace the dog was looking to him for signals within minutes. Not a single word was spoken.

The silence factor took a while for me to comprehend. It was only after I began working with my own dogs in the following days, that I finally understood. Then everything began to make sense. Is it just a happy coincidence that all those men and women who successfully compete at the top level of working tests and field trials are people of few words?

Maybe , in relation to retriever training, the less said the better…. 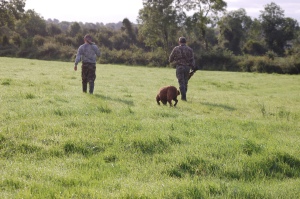 There is something deliciously exciting about rising before dawn and heading West to hunt. To be the first to walk across the dew covered fields towards the banks of the River Shannon. All the world is still asleep and missing the magic that is about to unfold.

This morning was bright with no wind. It would not be a good one for decoying. We were prepared for a morning’s walking through the flood pastures and  six foot high elephant grass that grow in swathes along the Shannon. The ducks, we hoped, would be feeding in the shallow waters among the reeds.This type of shooting is hard  as the marshy ground along the river bank pulls relentlessly on legs. 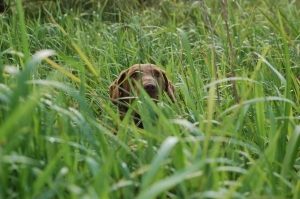 A dog that will keep to heel, has a good nose, (as most retrieves will be blinds beyond the reeds) and can work on their own is invaluable. This morning, Winnie was the dog for this job.

After all the anticipation and build up over the last few weeks first mornings’ can almost be an anticlimax. The full flush of migratory birds has not yet descended on our shores from northern Russia and we also knew that by going out  on the second of September we could be dealing with skittish ducks that had been rattled by the previous day’s onslaught.

Our first approach held promise. As we discussed the merits of whether or not to climb over or under an electric fence a batch of about thirty mallard rose from the bend in the river…we cursed our hesitation, hastily fired off a couple of very ambitious shots but watched in dismay as they scattered and flew on down river. This was to be the pattern of our morning. Plenty of duck and plenty of missed opportunities…but every once in a while everything falls into place and all those misses are instantly forgotten.

Winnie worked well. She is a pleasure to have for this type of shooting. Her first retrieve of the morning was a perfect warm up for any to follow. The bird rose nicely from where it had been feeding in the flooded meadow and curled out over the reeds. One shot and she fell cleanly among the rushes from where Winnie retrieved her efficiently .

It was the final retrieve of the morning, however, that makes you realise just how valuable a dog is for this type of pursuit. We had, by now been out for over four hours and were headed to a spot that Emmet had seen geese on last season. We parked just short of a slipway, jumped the gate and quietly moved along the bank to the far end of this small lake. To our right was a bank of high grasses, which rose above our heads and formed a four foot barrier between us and the water. Nothing was moving. We reached the end point of the lake and surveyed a pool among the rushes that birds had been feeding in. Again nothing….then suddenly there was a splash and a quack and two mallard rose from the water. Shots were fired and one bird brought down beyond that bank of tall, tall grass.

Winnie had been with me, the far side of the ditch and although she heard the gunshot she, like me, had no vision on where that bird had fallen. 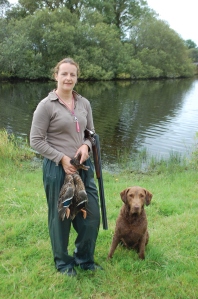 The boys had a rough mark.They reckoned she had dropped about thirty meters out beyond the bank of grasses. I gave Winnie a line through the grass and off she went. It was like lifting a curtain and letting it fall. We, on the bank, could give her no guidance. She was going to have to use her nose and her initive. Experience, hopefully also,would tell her there was a bird in open water. After a couple of minutes I could hear her coming back through the reeds. Her breathing told me that she may be carrying something and then she emerged through that curtain of grass with a fat female mallard in her mouth. My sweet, sweet girl.