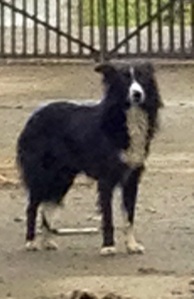 None of us know where she came from. Her story starts the morning she arrived in Tim’s yard about twelve weeks ago.

Hunger and a desperate need to survive drove her to seek out the company of humans, we think. She stood on the edge of the yard wary, extremely thin but brave enough to accept food that was left for her by Caroline. She was free to go, if she wished, but something kept her there. After two weeks of cautious coaxing she allowed Tim to rub her gently while she ate but that was all. As soon as her meal was finished she turned her back on him and disappeared, yet again, into the darkness.

Then, one day she was gone and for a full six nights and days there was no sign of her. After a week she appeared in the yard again and, if it was possible, she was even thinner and in worse condition than before. She devoured the plate of food Tim put down for her and then hurriedly disappeared back behind one of the sheds. Curious, Tim followed her and found, to his surprise, six tiny puppies no more than a few days old. 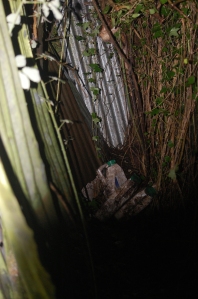 The den where the puppies spent the first ten days

Winter was starting, it was cold, windy and wet but the little collie had, against all the odds, done what she needed to survive to give these tiny beings a chance to live. Her nest was the bare earth, sheltered only by a rusty sheet of galvanised tin. It was just enough to keep out the rain and wind. We were afraid to move her to a more secure location in the early days. Her mistrust of people could have made her abandon the puppies or worse move them to a location where we would never find them. So for the first ten days, until their eyes opened,  Tim did his best to re-enforce the den with plastic sheeting and he anxiously observed from a distance.

Ten days in and against all the odds she had successfully brought her little family to a point where their eyes opened and they had passed the neonate stage and into puppyhood. Tim moved them then into a very sheltered corner of the hayshed. It was quiet, secluded but most importantly, for the little black collie, it offered her still the freedom to come and go. 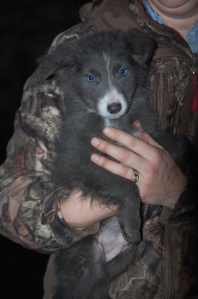 I have to commend Caroline and Tim, at this point. It was not in their immediate plans to adopt one dog let alone a whole family but they rose to the challenge, took on the responsibilty and discovered that although it was hard work, it is impossible not to become attached and responsible when an animal desperately needs your help.

They wormed the little collie, coped with weaning and cleaning up after six healthy, active and inquisitve puppies. They gave names to each and every one, including the mother whom they’ve called Pria and like her namesake in Emmerdale she is pretty, vulnerable but has a will of iron when it comes to surviving. They have worked on teaching her to trust, allowing her to come to them , putting no pressure on her just patiently waiting. 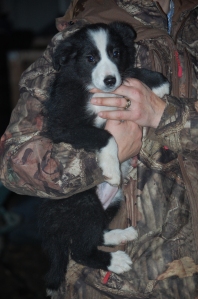 Whatever happened in Pria’s past in relation to her nervousness around people has not transferred to her puppies. So we can only assume that the timidity is as a result of social factors as opposed to something inherent in her personality. As such we are hopeful that with time, love and attention she will find a loving and loyal home.

We have found homes for four of the puppies but Pria and two of her little beauties are still waiting. We will wait until the right one comes to us as we feel after everything she did to ensure the safe passage for her babies the very least she deserves is a chance to experience some love and kindness in return. Don’t you? 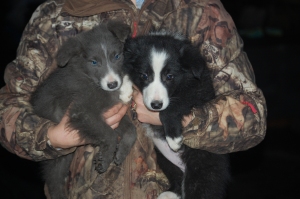