Vintage Massy Ferguson tractors shined, greased and oiled to perfection chugged their way along the road in convoy through the moors, their drivers waving us by in salute whenever the road straightened enough to do so. A heavy fog hung over the valleys but on the higher peaks great swathes of purple heather broke the otherwise grey morning. We were on our way, in our own little Chessie convoy, to Hope Valley Agricultural Show to compete as part of a team in a retriever working test. 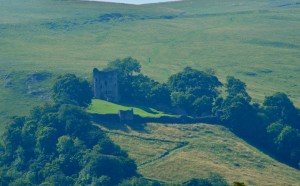 The view from the showgrounds – Peveril Castle.

Do you know what I love about agricultural shows? There is a comfort in knowing that people still take pride in the art of jam making, baking cakes, knitting and needlework to enter them in competition. The preservation of certain specialised breeds and types of sheep, cattle, pigs, horses and goats is ensured as long as there are stockmen and women interested enough to bring them out to be judged against a standard. Wandering around the back of the holding pens you see just how much care and attention to detail goes into presenting their animals in their best possible light and the judging is intense, every inch of the animal is examined…the horsemen taking it to an extra level by even having the judge ride each horse in the class. These are our heritage, I feel, skills that if lost will surely leave us poorer as a race. Which is why I feel that in our own sport working and showing our gundogs should continue to be an important part of bringing our breeds into the future. 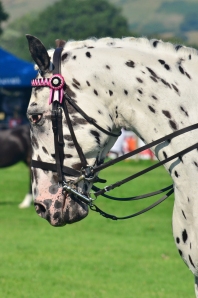 Hope Show had everything on offer that day from sheepdog trials, show jumping and one of the most unique retriever working tests I have ever been a part of.

Eight teams, each team a different breed of retriever- a team of Chesapeakes, Chocolate Labradors, Golden retrievers, Irish Water Spaniels,Yellow Labradors, Flat Coated Retrievers, Curly Coated Retrievers and finally not to be forgotton Black Labradors.. The event is run and organised by the Northern branch of the United Retriever Club. Each team ran as a unit, made up of two novice and two open level dogs, completing a series of four tests throughout the day. The Chesapeakes were first team up that morning so not much time to think about nerves or strategies. We would hopefully set the standard for others to follow… 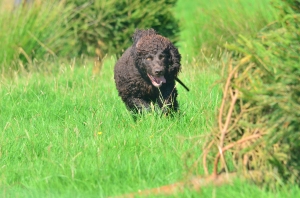 The fog in the valleys cleared quickly to reveal Derbyshire county at her finest. Sapphire blue skies created the backdrop for the rugged ridges of Winnats pass and Mam Tor. As the day warmed up the most amazing sight of dozens of hang-gliders resting like giant butterflies on the side of the Tor could be seen before they lifted off and glided gracefully to the valleys below, allowing the air thermals and breezes to carry them in whichever direction they wished.

It’s not always the easiest to run from the front but we started well that morning, scoring well above average and were in the lead after the first four teams ran. By the end of the third series in the afternoon we were still holding well in second place, with just the Yellow lab team stretching the lead in front. 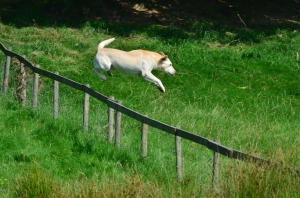 The yellow Labrador team put in a strong challenge to immerge victors.

The last test series was upon us and as we stood in  line for the last time I could certainly feel the pressure. The teams were piling up behind us, slowly but surely pulling back points with each retrieve. We needed a fairly clean sheet to hold our position. 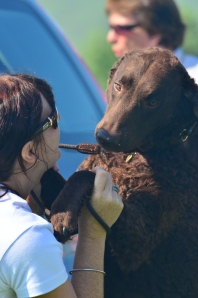 The final test was split into two parts. The first part was a straightforward mock drive incorporating gunshot and beaters. All that was required here was steadiness from the dogs. Our team of brown dogs sat impeccably throughout. At the end of the drive we were asked to put our leads back on and turn our dogs ninety degrees away from the direction of the drive. The second part of the test was explained. There were six dummies to be retrieved from across the fence in front of us. To the left was an area where the dogs had all worked and retrieved from that morning, as well as the area where they had just seen ‘birds’ fall. This could potentially draw them to an area the wrong side of the fence. There were two ‘runners’ planted at the lower end of the field on the right, if retrieved bonus points were gained. In theory, a straightforward test but its  those simple ones that allow such little room for error that can mean the difference between final victory or defeat… 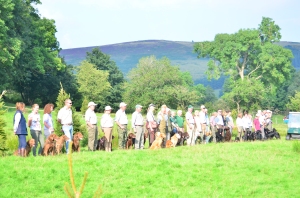 The eight teams line up for presentation.

In hindsight I would have handled Bertie differently. My intention was to get one of the ‘runners’ but he thought otherwise and pulled left from the start towards the area of an old ‘fall’. It’s always a split second decision in these cases. Of course in training I would have immediately called him back, gave a definite ‘leave’ command to his left and recast him right but in competition there isn’t this option. There were two choices running through my head the moment I saw the direction he took…let him run on to the fence, clear it and then stop him and cast right or stop him immediately cast right/angled back and then over. In that split second I chose the former and it was the wrong call. Three whistles more than I would have liked to get him back down the field to the area of the fall. He got the ‘runner’ and subsequent three bonus points bringing his final score to 18/20. Now we had to sit back and wait, hoping that the remaining teams would stay chasing our heels and not overtake.

In the end there were too few mistakes from the chasing pack we finished fifth overall and got a certificate of merit rosette. We had set  a great challenge and as we stood in line for the presentation with the other teams I felt very proud and honoured to have been invited to run and represent our lovable brown brillo butts…..maybe next year we’ll reclaim that  silver cup….

Bertie’s individual scores for each of his retrieves were : 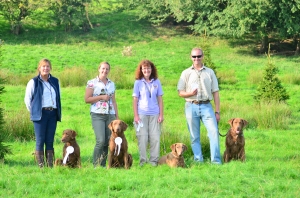 The time had come to leave in chessie convoy but this time we took a turn right on leaving the show grounds and followed the road through Winnats pass and up to the base of Mam Tor. We parked the cars and trekked all the way to the top with six chessies and a tough little four year old girl. It was after seven in the evening but the air was still warm. All along the path on our way to the top flying ants were warming up their wings before lifting off into the evening air. And finally we were there and it was so worth the climb. To think this great expanse of openness is just thirty minutes drive from one of the most densely populated cities in the world is a testament to how the British have valued the preservation of their rural landscape. 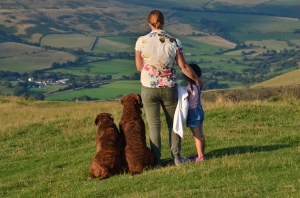 The view from the top of Mam Tor.