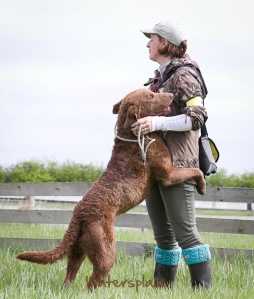 He didn’t mark the retrieve. We were first dog up in a three dog line up and I knew that even though he took a great line, running all 200 + yards until he was parallel with the thrower, he hadn’t locked onto the fall. Everything in his body language from the send off told me he was unsure. His nose was not going to help on this occasion either as  it was one of those dead-air Summer days with not even a wisp of a breeze to kick up scent. He was going to need my help now to find it and I knew with every whistle our chances of finishing near the top on this day were tumbling away.

I could have left it at that, put it down to a combination of factors that caused a mismark but I know my dog and have seen him pin many more difficult and technical marks than the one presented on that day. I allowed for the fact that I had two bitches in season and tensions among the males were particularly high in the days preceding competition, he was certainly distracted but had held it together in the line. I also allowed for lack of scent and the fact it was a green dummy thrown against high green trees but were there other factors?

The following week we met up with our small training group for a complete ‘marking’ session on the Hill of Tara. The ground here is wonderful for setting up scenarios of different marks long rolling hills with wide open grassland and a scattering of trees with ditches. Almost any combination can be worked on. We set up three dogs in line facing a thrower about 100 yards away throwing into short grass into the corner of the field. A simple seen. Bertie again was first dog up and when I sent him there was that same lack of committment I had seen the previous Sunday.He ran over the dummy had a quick sniff around and then instead of persisting he started to come back in!! Now I knew there was something going on.
I sat him out for the remainder of the session and he was content to sit and watch as I threw dummies and laid blinds for Stevie and Otto.
I left him off training for another week until the bitches were well clear of their respective seasons and reintroduced him to marking practice. Simple singles both long and short, keeping it light and fun with lots of praise his drive and confidence returned. I increased the difficulty of retrieve work again offering in the odd blind and diversion and was pleased to see he coped with these in the same way. Always returning to marking practice varying the distance and leaving off the whistle to allow him figure out that fall on his own.
Then one evening I happened to flick into a retriever forum and picked up on a post where a guy was having problems with his young lab marking. This particular dog had been a very reliable marker during his first year of competition but now he was struggling, even with simple marks…the problem sounded familiar. The solution offered to this handler made perfect sense. It would seem that often when a dog is being drilled to perfect a certain aspect of their training they may struggle with tasks that came easily before. I had spent much of the spring perfecting Bertie’s blindwork and tightening up on his response to the whistle. Was it possible that the pressure on him in training along with the other factors had spilled over and had affected his concentration to mark? Certainly the adjustments I had made to his training in the weeks following seemed to bear this out but I would not truly know until he was tested again in competition.
We entered the working test in Castlehoward primarily to support a very worthy cause. The event was organised by Mr Jim MacAul a stalwart around the shoots in Wicklow. It was run by the All Ireland Utility Gundog Club and all proceeds were being given to Our Lady’s Hospital for Sick Children Crumlin.
I was only looking for one aspect of success with Bertie on this day…a good confident mark.
The mark that day involved a two dog walk up. We were second dog up. Distance was about 250 yards we were set up along the lake bank. It was short grass to start with then out across a path under a fence into longer grass then under a second fence through some rushy cover then open ground to where the dummy fell.
Our turn came. When my number was called by the judge I sent my dog. This time there was no hestitation in his run out he covered the ground with the same confident stride that brings a tingle up my spine when I watch him. Coming to the rushy  cover he caught the whiff of scent where dummies had been thrown in the novice test that morning but a quick cast around and without prompting he pushed on up the slope and picked that dummy. The retrieve, although not perfect, was a long way towards the return to the standard of marking I had seen him deliver in the past and most likely helped him gain second place that afternoon. 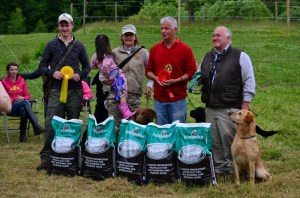 Encouraged to see his form returning I stuck with an easing off on training, keeping everything light again, lengthening the marks every now and then but all the while keeping blind work simple with memory blinds along known pathways.
This past Sunday we headed west to Mohill Gun club along the shores of Lough Rynn. By the time the advanced test started in the afternoon temperatures had risen to the mid-twenties. Nothing moved to bring coolness or scent to the air. It was a single long seen with two dogs in line. Distance 250 yards+. We, again, were second dog up. Our number was called and I sent my dog. I put my whistle between my lips and watched Bertie roll on up the hill. His line was good…the dog before him had cast around and needed handling…I prepared to help him but resisted the urge to blow on that whistle…he was almost at the spot,twenty feet, ten feet and then I watched with relief as I saw him dip his head and pick that dummy.
He scored a perfect 25 that day and although he didn’t finish in the top four placings only 2 points separated him from the leading dogs.
Lost points are something I can ponder on for another day, something to work on and aim towards but today’s score was simply sweet. It taught me to trust in my dog more, to watch him and listen to him when he is giving signals that something is just not quite right or that he’s simply reached his ‘tipping point’. To know that the ‘tipping point’ is not the end but an indication to cease pushing on until the dog pulls through that period of adjustment…what do you think?