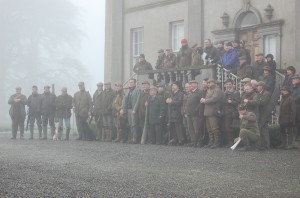 The fog came again for beaters day at Mountainstown. Winter was not quite ready to relinquish her grip and she threw her veil across the countryside holding everything immobile in her grasp. As everyone gathered in the courtyard the weather, possibly, reflected how many of us felt. Beaters day, although exciting, also reminds us that shooting season is coming to an end. It is bittersweet… and so today the fog that wrapped itself around the old house was welcome. We could forget the promise of spring for a while and focus on enjoying the camaraderie that makes this shoot such an enjoyable place to spend the Winter.

I had decided not to shoot on this day. My plan was to work my dog and take plenty of photos as the action unfolded throughout the day. Alas, the weather put paid to much of my  photography as my lens struggled to make contact with the Guns on pegs through the fog, besides something else rather unexpected caught my attention. I had been given the  radio for the day in case James needed to contact the picking up team at any stage. As we loaded ourselves onto the picking up cart and followed the Guns’ wagon out of the yard the radio chattered away as it hung around my neck. Conversations between James (the keeper) and Rupert (the shoot manager) interspersed with reports from Demise, Gavin and Donal as each of them took their teams to various points from where they would start moving birds towards the allocated drive. 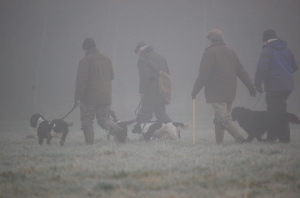 The names of the drives are engrained in my memory after so many seasons – Cowfield Wood, Arthurs Hill, The Fish Pond, Romwood and the Garden Paddock-  each one means something different in relation to picking up, knowing which way the birds will come, where the heaviest shooting will be, where the birds are likely to fall and how near or far the Picker needs to stand from the Gun. As I took up my spot at the Keepers pen that morning, the radio was giving me an insight to what happens on the beating line. Rather than being a nuisance I was transfixed with the dynamics that were unfolding across the airwaves.

Each team will have taken their birds in from a different direction, sometimes a long way out from where they will eventually flush from. As the teams converge pressure is applied on the birds in different directions, slowly at first by just the tapping of a stick or the cracking of a flag birds may move and flush with very little prompting. This will give the guns time to prepare, a chance to take an early shot and settle the nerves. 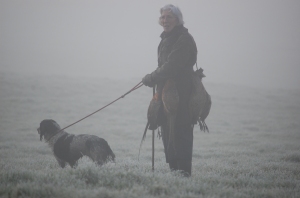 Everything was coming together across the airwaves, birds were breaking nicely in a variety of directions and despite the fog were flying very well. The teams had merged now working forward slowly and steadily..stop…flush…tap…forward…flush…stop….tap…more pressure applied on the right to spread the shooting evenly and all the time the flow of conversation continued between James, Demise, Gavin, Donal and Rupert, all the time the control rested with James…nothing or nobody moved unless on his say so. Fifty birds in the bag at the end of the first drive and smiling faces as Rupert passed around the port. Once again, James and his team had delivered. They had not failed all season and I looked forward to listening in as the plot was revealed for the next drive.

The moment when that first flush of pheasants fly out over the guns is the end result of a lot of long, long hours of preparation, planning and teamwork. There are several key players that help bring this about but what makes a shoot succeed or fail undoubtedly falls on one person’s shoulders, the Gamekeeper. Everything starts and stops with him. It is a universal thing, it’s why Alex ferguson has held the reigns at Man U for so long, for example. There can be only one leader but a good leader  recognises that he alone cannot bring about success. His loyalty and respect for his team are unquestionable and perhaps this is the secret to a shoot’s success. 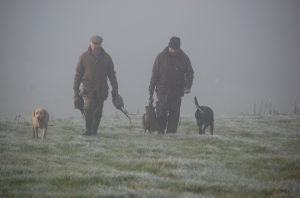 The end result, to an enjoyable day…birds in the bag.