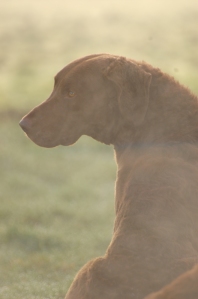 February 17th. ( this is a blog I wrote at the start of the year )
Training this morning was on the Oristown Bog. Weather was
mild with a light drizzle and moderate winds from the West. I’m not sure whether
it was the increased wind or the  unudulating ground but their scenting ability
today was unbelievable.

Most of the working tests early on in the season,in Ireland , take place on or around bogland. It’s tricky for a dog that has no experience of handling it. What appears to be ground with smooth transitions is in fact a maze of hidden ponds overgrown with moss. This means that when a dog makes a run out on a ‘mark’ they more than likely will encounter shifts in momentum as they negotiate unforeseen obstacles.

This morning was our first morning trying the dogs out on this type of ground.Our intention therfore, was to shorten distances and keep to single marks perhaps stretching them out a little if they coped well. Our training group was back to 2 handlers . I had 2 dogs- Mossy and Bertie and my little helper, Elly, also accompanied us.
This was Mossy’s first time back in training mode so steadiness and
marking were my two priorities with him.

Although brothers , Mossy and Bertie, have been like 2 sides of the one coin. Up until now one has excelled in conformation and the other as a working dog. It was never my intention to keep 2 brothers from the same litter. It just happened that way. To give equal time to both dogs at the same disciplines in the first 3 years of their lifewas a luxury I did not have. So up until now I have taken the easier path of following them in the areas they each are strongest at. That is all about to change…

My intention this year is for a role reversal of sorts. Bertie will compete in his first show of the year in April . Hopefully to win his first Green Star,a point towards becoming an Irish Show Champion . Mossy will continue to train up with the intention of running Novice Working tests this Summer. Both will continue to compete in their respective ‘ areas of excellence ‘, but just not against each other.

Anyway, back to training this morning. The choice of ground was a good one. Despite the difficult terrain all 3 dogs marked well . The small adjustment that Sean suggested in my handling of Bertie has made a huge difference in his attitude to handling. Thanks Sean
.
A point of note though ,although the ground was a challenge and the dogs worked well , I would be cautious of training there too often. Moving over ground where they are uncertain of their footing may lead to a reduction in the ‘ gutsy’  out runs I’m used to seeing from ‘My Boys’…maybe I’ll be proved wrong??